A 2BHK apartment along the Old Mahabalipuram Road (OMR) that was available for Rs 12,000-15,000 per month a year ago, now commands a monthly rent of Rs 15,000-18,000! This clearly indicates an annual appreciation of 20-25 per cent. Thus, investing in a residential property along the OMR in Chennai seems to be a good proposition.

“OMR is faced with a situation of over-supply today. This has resulted in capital values stagnating as buyers have a wide range of options to choose from. Even though the over-supply has had an impact on the rental values, but compared to outright sales the rental market in the location is still up beat,.

So, what has led to a situation of over-supply in the market? Most of the residential demand is pouring from IT professionals working in the numerous MNCs along the OMR. “Since many of these young professionals are not locals, they prefer rental accommodation than buying their own homes. Thus, the demand along the OMR stretch is more aligned for rental housing,”.

Thus, in case you are looking for a second home as a future asset, buying a house on the OMR might prove profitable what with the high rental returns it promises. Hardcore investors may also target OMR for healthy returns.

The highways department has finalised the alignment of the new link road between East Coast Road (ECR) and Old Mahabalipuram Road (OMR). The final decision was made by a steering committee with top officials from the highways, Chennai Metropolitan Development Authority (CMDA), Chennai Corporation and police.

The new road will begin at Neelankarai on ECR, cross Buckingham Canal and join OMR opposite the Pallavaram-Thoraipakkam Road junction.

Though the alignment was part of the Chennai Metropolitan Transport Authority’s master plan in 2008, a private consultant was appointed to study the feasibility of the project. The consultant carried out traffic studies and found that there is an urgent need for a road at this junction.

There are no roads connecting OMR and ECR apart from Kalaignar Karunanidhi Road in Sholinganallur and West Avenue Road in Thiruvanmiyur. These two roads are 10km apart.

“Earlier there was a small bridge that we used to cross the canal. But it was closed a few months ago. Now we have to go all the way to Sholinganallur and then come back,” said V Srinivasan, a bank manager who lives in Thoraipakkam. “Not only is this a 10km detour but it takes half an hour just to cross the Sholinganallur signal.”

Unchecked real estate growth has been rampant in this area and may delay land acquisition process, say officials. At least 100 houses built illegally have to be demolished. Of the two options available — to go by the master plan or chart a new course through vacant land — the government has chosen the tougher one. This will give them legal leeway when it comes to land acquisition.

The highways department estimates land acquisition to cost around 100 crore for an estimated 42,000sqm that it will have to acquire. Around 30,000sqm of this land is owned by private individuals with legal deeds.

“Though most land owners have pattas, buildings on the eastern side of the canal do not have approval,” a highways official said. “People constructed buildings in violation of the master plan.”

The western side of the canal is mostly vacant and should the highways department should not have any problems with land acquisition along the stretch.

Chennai real estate market has been stable with moderate price appreciation of 8 10% in 2012. With inprogress infrastructure projects taking shape, the demand and capital values are expected to rise across all sectors. Focus on improvement of public modes of transport has been one of the major highlights in Chennai. This is evident from the expansion of the existing highways, work on Chennai Metro and the Outer Ring Road.

Approval of three new bridges connecting ECR and OMR at Neelankarai, Palavakkam and Kottivakkam is expected to impact the capital values. Going forward growth in Chennai would not solely be determined by the IT/ITES sector, but also the transport corridors of the above mentioned infrastructure projects. Chennai market is looking forward to the MRTS and BRTS projects to give the city a new face in 2014-15. 2012 has seen the city shift investor focus from the usual OMR, ECR to the WEST and NORTH of Chennai. The operationalization of the TIDCO & Ascendas SEZ at Tiruvallur and the operationalization of the new airport at Sriperumpudur in 2015 is driving interest in the North & West Chennai regions.

Global uncertainties and IT/ITES sector going slow with their expansion plans impacted the real estate scenario in Chennai with high vacancy rate. Though the focus on residential sector from developers end was high, and Chennai market saw remarkably high number of new launches in 2012. Sales were moderate in comparison to the new residential supply added to the market. In 2013 Chennai residential market is likely to see few launches compared to 2012 but improvement in sales with an overhang of 18-22 months.

A flyover connecting the Old Mahabalipuram Road and the East Coast Road is now a step closer to reality. The design of the flyover that would start near Tidel Park on OMR and land on ECR was given a go-ahead by a technical committee of the state highways department that met a few days ago. “The alignment of the flyover was decided in December last. Now we have decided where the arms will come and where exactly the flyover will land,” said an official of the state highways department.

TOI was the first to report when the alignment committee gave its nod in December last. The flyover will begin just after the small bridge on the Buckingham Canal on West Avenue Road. It will then cross the much-dreaded Lattice Bridge Road junction, turn right and then land on ECR near the Thiruvanmiyur RTO. “The final detailed project report will be submitted in three months. A tender will then be floated and work on land acquisition will start in a year,” said the official.

This is touted to be one of the most expensive flyovers in the city, given its size. “The cost has been estimated at Rs 400 crore,” said the official.

Commuters on the stretch say that while the flyover would make a difference, the Tidel Park junction is still a bigger problem. “This flyover will make a difference, albeit a small one. It is a temporary solution and the bigger problem is at Tidel Park,” said Suresh Menon, a cinematographer who has been working with the Chennai Traffic Police on solutions for traffic management in the area. “While one would take 10 minutes to cross the traffic signal at LB Road, it takes at least 45 minutes to cross Tidel Park signal. Coming from Madhya Kailash, traffic piles up well past Thiruvanmiyur MRTS station,” he said.

Earlier this year, the state government announced that a 45-km elevated road would connect Madhya Kailash and Mahabalipuram. “We will soon appoint a consultant to study the feasibility of this project as well,” said a highways engineer.

Additional commissioner of police (traffic) Karuna Sagar said this was the only real solution in sight. “There is nothing else we can do to manage the traffic flow. It takes more than one signal cycle to clear traffic and hopefully the situation will improve after these projects,” he said.

Source: The Times of India, Chennai

Demanding infrastructure status for the sector, he said, “This will help the sector getting government incentives, subsidies and tax benefits. Besides, it will also lead to lower cost of funding and taking loans from financial institutions will become cheaper translating to more supply of affordable houses.”

“In most states, the floor area ratio (FAR) density and ground coverage norms do not support the creation of affordable housing the long approval process is another major problem. In major cities where land cost is high, this is possible only under PPP model,” Raheja added.

The first and foremost payment to be made to the builder is the booking advance (up to 10 percent of the property value) for which a receipt duly acknowledging the payment and an allotment letter is given to you. Since some builders make the booking advance non-refundable, it will do you good to be completely sure of the deal.

The allotment letter is a document that is given by the builder to the buyer when a property is booked. The letter contains facts and figures of the property, payment options and other charges applied for maintenance, added amenities etc. Normally, it is only issued after a payment of 15 percent of total value of the property. It also gives you information about the construction details and plans, architecture details and certain other specifications of the project, the date of delivery etc. This letter will give you a strong hold in case the builder is delaying your possession. You must discuss any preferences, such as choice of floor, parking etc. before receiving the allotment letter as these options will be included in it. This is the first agreement that you sign with the builder and includes the following:

Why is this necessary?

Usually, at the time of a bank loan application, the allotment letter that will have the description of the subject property that is being sold/bought by the two parties is required to be handed over. It is the most important document for applying for a loan, as it contains the details of the amount you have to pay for the purchase of your house. Thereafter, the remaining amount will be calculated and financed by the bank.

An allotment letter holds great value as it is the only document which will be with you as proof of your property dealing. If you have not been offered your dream house in time or as it was promised, then this letter will help you lead a case. An allotment letter is vital in availing a loan from the bank, as the letter mentions the amount of money which you have to pay to the builder/housing society, so that remaining amount can be financed by the bank. Generally, on the basis of this letter, the bank finances the remaining amount.

Although the general impression is that the sales agreement holds supreme importance in a property deal, the allotment letter comes in when you are deprived of what you were promised. For example, if on any one of the pertinent aspects mentioned in the allotment letter, your builder refuses to give adequate proof of document, as a buyer you can opt not to make a subsequent payment and can demand that unless he satisfies the disputed aspect, you will not make the payment. It will legally bind him to refund the money. 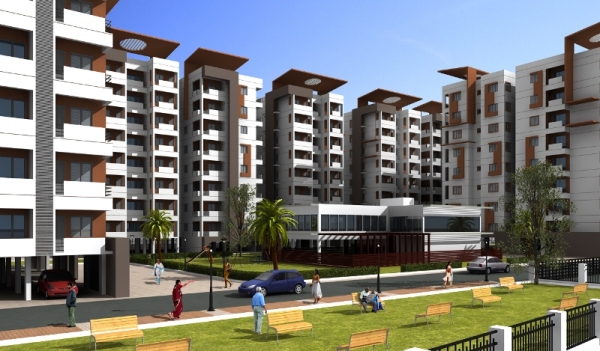